The gale-force winds were kicken’, the temps dropped to 30 degrees.

Our weather-beaten RV tossed and turned through another restless night. But, we made it to the coast, and the dramatic weather change just seemed ‘par for the course’ of our far reaching adventure to the Lower-48. To top things off, we apparently had a stowaway mouse lost in our cupboards! This is the winter season, after all, and crap weather, even this far South is to be expected, I guess. We ‘Nomaded’ from the Oregonian Coast on the Pacific Ocean to the Texas Coast in the Gulf of Mexico, 4,300 miles. It’s here that we spent a very quiet New Year Eve, sheltering in our RV, asleep by 2200. But again, I’m a bit ahead of our journey. (Coast to Coast)

After our heavy, ‘Underworld’ descent into Carlsbad’s subterranean caverns, we felt the need for the ethereal companionship of old friends. One of the benefits of military travels to the ‘four ends of the earth’ is making friends with others who travel with the winds and torrents of fortune. In almost every major city where we parked the RV, old friends were nearby. So was the case with Stuttgart friends Ms. R and her hubby Mr. J in Georgetown, just north of Austin, Texas. Two days at their beautiful home and enjoying the highlights of Texan Cowboy hospitality at the local ‘dive’ hangouts was the key ingredient to raising our spirits for future adventures on the road.

We all enjoyed the company so much that when we traveled further south to the ‘German-Texan’ town of New Braunfels, they joined us at the famed Alpine Restaurant. We enjoyed the walk down memory lane and the culinary delights we all experienced in our Germany adventure. The Alpine did not disappoint. We started the meal with a genuine Kristallweizen beer and stuffed our ‘Magen’ with a deliciously authentic Roulade, Schnitzel, and Cordon Bleu main course. Just heavenly.

As Nomaders, we assume many different roles or characters according to the landscape. For the two

nights we spent in the New Braunsfels RV camp, we were Trolls; not the nuisance social media types, but the ones that live under bridges. Our camp was carved from the foundations of the highway (I-35) bridge over the Guadalupe River. But it wasn’t as dreadful as it sounds. We had the river out our back window and all sorts of species of waterfowl and shorebird that played in the gurgling waters and taunted poor Azzuri through our screen door. It was a pleasant visit, at least for us two-legged creatures.

Speaking of Azzuri, the Adorable Cat. She’s rapidly tiring of our ‘Magic Door’.  Every time we run that horrible, bumpy engine and open the door; magically, it’s a new scene. Just as she’s accustomed to the noisy river and geese out her door, the next time she opens it up, it’s an arid, dusty, humid wasteland of tumbleweeds. She’s a bit exasperated with us for dragging her through this. “When will this end?” Good Question, we’d love to know as well.

Again, off to see more friends; there are lots of them in the warm climates of the South. As they too were traveling at that time, we hop-scotched over their town and headed to the beach for six days of navel-gazing, sun worshiping, and enjoying Ms. Nature’s finicky weather patterns. Our stay was on the inter-coastal shore on the Naval Air Station RV Camp at Corpus Christi. What started out as a southern fed humid and hot windy breeze changed (promptly at 0224 in the morning) into a frigid and blustery northern tempest. We got the best and worst of it all, but fortunately, we’re ‘hardened’ to the discomforts of an RV rocking and rolling, freezing night.

The flip-side of our New Year’s hiatus on the beach, well, was the beach. After the storm, we traveled

over the causeway to spend an afternoon on Mustang Island (Padre Island). There is beauty and delight even in the windswept gust of the abandoned beaches. We like the winds; we enjoy the beaches all to ourselves, and the cascading grays and dark blue hues of the sky and water intermingled with the tans and brown striations of the beach recharges the spirit as can few other batteries. Just glorious. If we were asked to pick which beaches on which side of the country we like the most, Pacific Vs. Gulf Coast, we’d tell the asker to relook into their priorities. “Which beach is the best?” The one you’re standing on, obviously!

One calm evening we located our vagabond mouse. The previous evening Ursula heard it rummaging around the cupboard above the couch – it kept her up most of the night. The next night was my turn on the couch with our uninvited guest for an evening. As I turned out the lights, the scratching resumed. A few curious moments of searching the cupboard with flashlight and swatter in hand produced nothing. The lights went back out, but the noise resumed.

I saw movement in a glass jar filled with seashells out of the corner of my eye. How the hell did a mouse get in there? It didn’t. Apparently, our nightly visitor was a trio of kidnapped sea creatures housed in the shells that Ursula picked up along the shore. Apparently, they were not as empty as they appeared! As soon as the darkness resumed, so did their escape plan agitations.  The following day they made their way back to the beach….or into the stomach of a satisfied bird. We’re not sure which. Anyways, our mouse mystery was solved, and another Nomading lesson was learned.

Regretfully, we pinned another name to the ‘Must Return’ list. We had to leave our blustery open field next to the shell encrusted shore with diving pelicans, a few cranes, and even a visiting orca whale or two. We also added to the list of ‘Must Revisit’ restaurants, the Black Dimond Oyster Bar, just outside the main gate to the base. It’s a ‘hole in the wall,’ ‘Dive Bar’ with indisputably the best oysters to be found. It would have been a sad departure, other than that we were leaving to visit more friends.

In the Canyon area, just north of San Antonio, resides another retired military couple (Ms. N and Mr. O), who we met, not in the Service, but in retirement in Alaska. A couple of years back, they left behind the long, dark, and frigid winters of Alaska’s ‘Valley’. They moved to live amongst the Live Oaks, Rum

Distilleries, Micro-Breweries, Olive Oil vineyards, Sun ad Warmth and the best Bar B. Q. Texas can offer. In our short stay at their beautiful home, we experienced them  all.

On top of that, we took in a quick history lesson of the ‘Lone Star State’ by strolling amongst the memories of the Alamo, San Antonio’s Old Town, and a brisk walk astride the famed Riverwalk. Never wishing to miss the best of the best, we stopped at Boudros for their incredible Table-side Guacamole and Tall Margarita. Yeah, they charge astronomical prices….but, why travel only to feast your eyes on the local delights?

Too much of a good thing is too much. Off we left to our recharging station, the beach. This time to Galveston Island and an RV camp right on the beach. And…. You guessed it, the winds are kicking, the precipitation is around 80-92%, but we couldn’t care. We love it. Unfortunately, we’ll only be here two days as it’s an ‘in-transit’ stop to,….. we’ll, you’ll have to read the next blog. But think Cajun food and blender drinks, and you’ll have nailed it. Until then – Cheers.

We found a new angle to profiteering off your Nomading customers – charging for kilo-watt hours of electricity. Never heard of that one till we got to the Sante-Fe RV camp. It wasn’t something they broadcast on their website, but as soon as we registered, they had us initial a handout acknowledging the unexpected expense. Shit! How many kilo-wats hours do we use in a day? No idea, but at .15 cents for one of those things, we watched it closely. We didn’t use electrical heat for those chilly Sante-Fe nights because of it, but I guess we burned a good $5 in propane for the heater.

Turns out, in three days, we used $2.75 (plus tax) of Kilo-watts hours. OK, it wasn’t the vast ‘rip-off’ that I anticipated, but for the life of me, for such little ‘take’, why do they do it? I’m sure there are a few customers that abuse the resource. Still, at $2.75 for three days, it can’t be worth the profit of a daily meter check, running the register, charging a credit card. I don’t get it. Oh well!

Previously I noted the claustrophobic effects of losing a slide-out. The slide-out is a section of the RV that rides on coasters and extends outside the regular dimensions of the living space. It significantly increases the internal volume of your “home”. We have one; we’ve seen others with up to four. They make a difference in relationship maintenance! Our slide-out mechanism broke, which created a precarious living environment. Without the one slide out, the RV is cramped. With a working slide-out, the RV is cramped. We needed to get it fixed.

My friend in San Antonio is a ‘Make it happen’ kind of guy who grew up on a farm and makes shit happen. We disassembled the mechanism during our short stay, found a welding fabrication shop, and had them weld the broken shaft back into one functioning shaft. Miraculously, the cog that turns the teeth on the coaster/rail fit. We reassembled all the parts and found we didn’t have any unknown parts left over when done. Most miraculously and gratefully, the slide-out worked! Yeah, our relationship is saved; our Nomading adventure will not end abruptly. Nomading Lesson learned: cultivate talented friends! 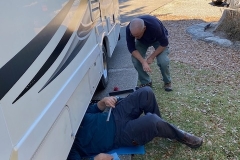 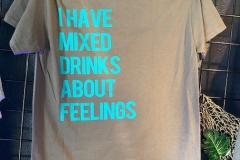 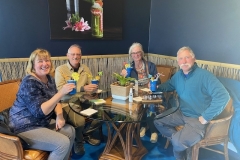 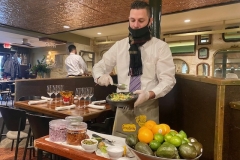 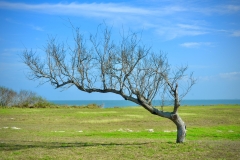 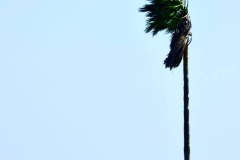 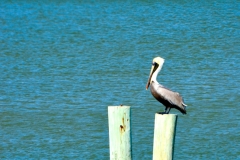 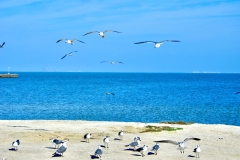 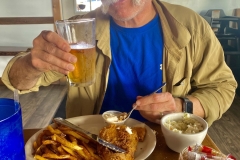 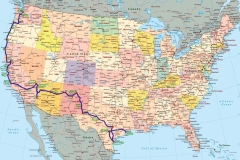 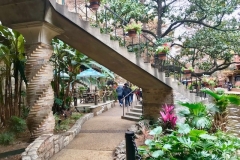 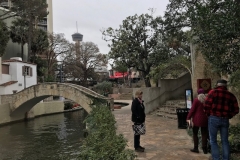 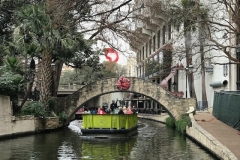 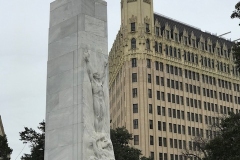 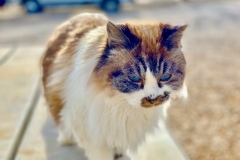 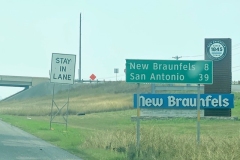 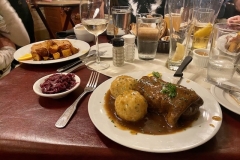 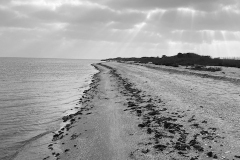 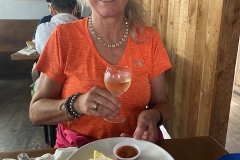 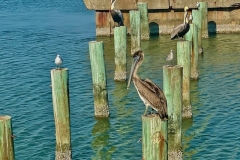 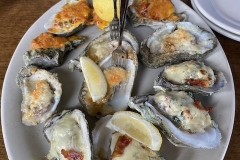 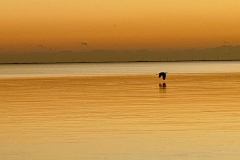 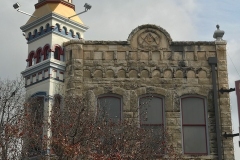 Read this blog from the beginning, link here

Visit all the Nomading the Lower-48 Blog, link here

If you enjoyed ‘Coast to Coast’, drop a comment below.

This site uses Akismet to reduce spam. Learn how your comment data is processed.

Great pics! I am just a little jealous when reading your blog and viewing the pics, but also happy for you guys!